As the Senator notes, despite the FCC’s assurances that 5G is “safe,” “We need evidence.” And classified evidence is NOT enough.

CFH and NISLAPP believe the available scientific evidence: The impact will be harmful. “We do not know it is safe” is very different than “It will be harmful and people need to be warned and protected.”

“NISLAPP considers it a mistake to place new high-frequency radiating antennas in local communities, in very close proximity to homes, office and schools, when no pre-market health testing at scale has been conducted on the effects of the radiation emitted, to our knowledge, and when much safer hard-wired internet access technologies are readily available. We strongly support Senator Blumenthal and Congresswoman Anna Eshoo’s request of FCC Commissioner Carr to provide the documentation evidencing the FCC’s ‘safety determination for 5G’, along with the supporting scientific citations used in making that determination.”

The formal request to Commissioner Carr requesting these documents was announced at a press conference this morning in Hartford. In the letter, (Link downloads PDF file) Blumenthal and Eshoo explained that recently, in a Senate Committee field hearing in South Dakota regarding 5G, Mayor Paul TenHaken of Sioux Falls, SD was looking for “clear direction, talking points, studies that have been done that show that there is no harm to our constituents and to the taxpayers on putting these small cells on towers close to libraries, close to schools, close to their homes.” And that Commissioner Carr responded at the time, saying, “Federal law actually says that state and local governments can’t take [radiofrequency] concerns into account given how much work has gone into this issue at the federal level…Both at the FCC and other expert health agencies in Washington, they stay very much up to speed on these issues and have reached the determination that these are safe.”

Following this exchange, Senator Blumenthal and Congresswoman Eshoo are presently calling on FCC Commissioner Carr to send the following documentation to his office:

They said his own constituents have similar concerns about 5G, and that they want to provide them with accurate information. 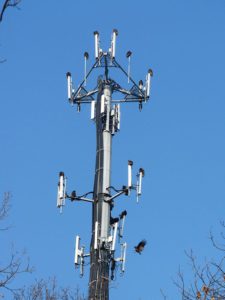 Senator Blumenthal and Congresswoman Eshoo said we “are interested in acquainting ourselves with the latest studies evaluating the health effects of high-band frequencies and modulations that would be used in 5G networks.” They noted, “Most of our current regulations regarding radiofrequency safety were adopted in 1996 and have not yet been updated for next generation equipment and devices.” They also mentioned the large U.S. government-funded study by the National Toxicology Program, published this year, using earlier generation technologies (2G and 3G), showed a link between radiofrequency radiation and cancer.

Blumenthal and Eshoo added, “Carriers will also need updated guidelines governing the authorization of devices to be used with 5G,” and “We also believe it is critical for the FCC to act on its March 27, 2013 Further Notice of Proposed Rulemaking and Inquiry to ensure all individuals, and especially those working in close proximity to the hundreds of thousands of small cell facilities to be deployed, are protected from any kind of excess radiofrequency radiation.”

The Communications Workers of America was present at the press conference, as was science writer and expert in electromagnetic fields, B. Blake Levitt. See Levitt’s remarks. (Link downloads PDF file).

The National Institute for Science, Law and Public Policy considers Senator Blumenthal and Congresswoman Eshoo’s line of inquiry about the extent of safety evaluations of next generation 5G radiation to be critically important. Camilla Rees, Senior Policy Advisor to NISLAPP, says, “All Members of Congress, as well as state and local government officials, might consider asking similar questions about the new, different and dangerous fifth generation radiofrequency technologies that the telecom industry intends to deploy widely within our living environments, and about which scientists around the world are warning. (Link downloads PDF file).

International scientists in many countries are calling for a moratorium on 5G until the potential hazards are fully investigated.

“Re-Inventing Wires: The Future of Landlines and Networks” by Timothy Schoechle, PhD: http://electromagnetichealth.org/electromagnetic-health-blog/wires-long-press-release/

We recommend Members of Congress and state and local government officials seriously evaluate safer alternatives to ‘antenna densification’ and the many angles (Link downloads PDF file) from which 5G distributed antennas are a very serious mistake for the United States.

1
24 Dec 2009
First Part of Battle Won in Illinois; With the Help of All of our Illinois Supporters, We Can Achieve Victory!

Terrence M. Cunningham, President of the International Association of Chiefs of Police and Chief of the Wellesley, MA police force offered and apology for historic mistreatment of minorities by police. To a standing ovation of 16,000 assembled police officials he decried the fact that police had become the ‘face of oppression for far too many of our fellow citizens’.

Original link: www.realclearpolitics.com By Jim Turner & Curt Levey We are the heads of two non-profit organizations – one of us liberal and the other conservative – who are concerned that the impending healthcare legislation will negatively impact holistic and natural medicine and limit the healthcare choices of the people who consume it. Because alternative medicine is highly effective in…

3
18 Jan 2012
The Bonvie Blog: Five things you need to know before applying any more sunscreen

Practice safety when it comes to protecting yourself from the sun, and let the FDA know they need to study sunscreens further