The Bonvie Blog: How About Some REAL Food for Thanksgiving?

Thanksgiving offers a wonderful opportunity — not only to “gather together” with family members and friends from near and far for a traditional homemade feast, but in so doing, to reject today’s fraudulent food culture in favor of the kinds of things that Mother Nature intended to sustain us. 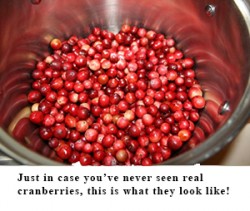 You might even say that there’s no better way to show how thankful we are for the ‘blessings of the harvest’  than to restore them to their proper place on our table. By that, I mean preparing and serving only the kinds of foods that are the ‘real deal’, rather than the adulterated, additive-laden, disease-promoting products that manufacturers have substituted for no other purpose than to minimize their costs and maximize their profits.

In an age when children have been encouraged by multimillion-dollar marketing campaigns to develop cravings for junk food and parents persuaded to serve nutrition-deficient, ready-made meals permeated with neurotoxic flavor enhancers and other synthetic ingredients that wreak havoc on health, Thanksgiving is an occasion for reintroducing to our families the simple delights of genuine food.

Take cranberry sauce, for example. Now, the cranberry is one of nature’s most healthful fruits — loaded with antioxidants, phyto-nutrients, anti-inflammatory and anti-cancer benefits.  Unfortunately, commercial food processors such as Ocean Spray have made it easy to serve canned varieties of cranberry sauce (either jellied or “whole berry”) that have been sweetened with high fructose corn syrup (HFCS), the laboratory concoction that studies have linked to our current epidemics of obesity and diabetes, as well as various other health problems. 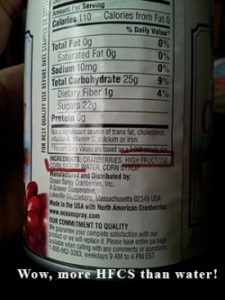 t with just a little more effort than that required to open a can and coax the HFCS-sweetened blob out with a knife, you can make HFCS-free cranberry sauce all by yourself. Fresh cranberries, water and sugar cooked till the berries pop will thicken as it cools and taste amazing (see recipe measurements here. Note, this recipe calls for orange juice, but you can also substitute water using the same amount).

Even worse than the canned cranberry sauce are commercial variants on some of the other stuff  traditionally served at Thanksgiving — like stuffing, for instance.

Two of the worst examples of this good side dish-turned bad are made by Kraft — Stove Top Turkey Stuffing and Stove Top Cornbread Stuffing.  Both look like laboratory creations, having been laced not only with HFCS,  but two other atrocious additives — partially hydrogenated soybean or cottonseed oil (a source of trans fats that ‘s now being officially phased out by the Food and Drug Administration as a cause of thousands of heart attacks every year) and hydrolyzed protein, a form of disguised MSG that can actually destroy certain brain cells — especially in children and the elderly.

Other brands of commercial stuffing mix, such as Arnold “Premium” Cornbread Stuffing and Pepperidge Farm Herb Seasoned Stuffing, aren’t much better, despite the image of wholesomeness these brands have tried to cultivate.  Both contain HFCS and that coronary artery disease-inducing partially hydrogenated oil.

Even if you have to make your stuffing from scratch (which is not all that complicated) there is absolutely no excuse to be using chemical concoctions like the ones mentioned above.  Arrowhead Mills, for example, makes a ready-seasoned organic stuffing mix that’s just as easy to prepare as Stove Top.

Then there’s the turkey itself, which can also contribute its own share of unhealthy ingredients to the mix. Watch out for any bird that is said to be “self basting,” deep basted,” or any similar claim. Also check the packaging for any added ingredients. You should be cooking a turkey, not conducting a lab experiment.

Of course, no Thanksgiving dinner would be complete without the seasonal scrumptiousness of pumpkin pie for dessert.  And your local supermarket can no doubt accommodate you with a choice of at least two or three brands, Marie Callender’s being a prime example. The problem is, Marie’s pumpkin pie comes with something besides pumpkin. It contains so much partially hydrogenated oil  that it actually registers on the trans fat scale of the Nutrition Facts label. (Most products that harbor this artificially processed artery clogger are able to use a loophole in the law to falsely claim they contain contain “zero trans fat.”)

A far better idea is to bake your own pumpkin pie using ready-made canned pumpkin, adding your own ginger, nutmeg and cinnamon, condensed milk and an additive-free pie shell (Arrowhead Mills makes a good one of those as well). You can also make your own pie shell from scratch, it’s much easier than you think. Just be sure to use graham cracker crumbs that have good ingredients, i.e., no partially hydrogenated oils, HFCS or artificial flavors or colors. The recipe is easy to find (also on every can of pumpkin), and easy to prepare. Just make sure you allow enough time to chill your creation in the fridge.

With just a little bit of extra effort, you’ll have a Thanksgiving table of which you can really be proud — one that’s free of the junk foods that the big food companies would like to have us think are traditional dishes and “original recipes.” And you can prove to your family and your guests that old-fashioned, genuinely ‘natural” food tastes even better than cheap, “convenient” imitations — and can make for a holiday feast that’s every bit as enjoyable as those pictured by Norman Rockwell.

Who’s Afraid of Supplements? “Do You Believe in Paul Offit?”

by Alison Rose Levy The Medical Establishment’s “Favorite” Doctor and His Crusade Against Supplements and Alternative Medicine Paul Offit’s new book and media blitz pretend to be objective, but really offer one-sided bashing of natural healthcare. Dr. Paul Offit, chief of the Division of Infectious Diseases at? Children’s Hospital of Philadelphia? has authored a new book, Do You Believe in…

Supplement Labels are Changing – Be #LabelWise

Consumers have a wide variety of choice when it comes to purchasing dietary supplements—choice that exists in selecting product categories and specific products as well as choosing the company or source that sells them. Some choices are smarter than others, and consumers would be wise to do their homework. Supplement labels are changing in 2020. Time to get #LabelWise!