In the midst of a pandemic with a pivotal election fast approaching, I would like to talk to you about chicken. And if you’re a member of the chicken-eating public, it could well affect how you feel about those nuggets, breasts, chicken soups and salads – and all the other ways we feast on fowl.

The National Chicken Council (NCC) is eagerly awaiting a Federal Register notice, and subsequent final rule, that will upend long-held USDA procedures about the processing and packing (and ultimate consumption) of diseased birds. And while it can take years for a proposed rule to become a final one, this has the potential to be fast-tracked while we’re all otherwise occupied.

Actually, the USDA’s Food Safety and Inspection Service (FSIS) has already decided to “grant” what Food & Water Watch calls the “cancer chicken gift to the poultry industry.” All that’s left to do is slip it into the Federal Register. And barring successful legal action or an amazing outcry from the public, this has all the appearances of a done deal. Here’s what the NCC wants to happen, and while the organization would like you to think it’s all about not wasting “wholesome” birds (despite their unwholesome state), it’s really about upping that line speed to increase profits for processing plants.

A ‘big win’ in the wings

In March of 2019, the NCC petitioned the FSIS to do away with a long-established rule stating that chickens afflicted with avian Leukosis (a retrovirus that causes tumors in young chickens) are not fit for human consumption and must be “condemned.” 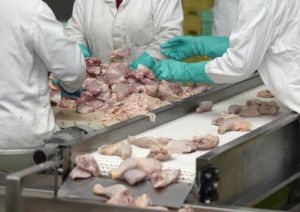 These tumors can appear in a bird’s liver, spleen, kidneys, and even in the feather follicles. As it appears in a current FSIS training guide: Leukosis can appear in just the viscera or just in the skin of the carcass; but any carcass affected with only one (or more) of the leukosis tumors…are unwholesome…(and) must be disposed of properly to ensure they are not used as human food.

Along with making these chicken tumors a “trimmable condition,” the NCC also wants to scrap the regulation mandating that when each new flock arrives for processing, the first 300 birds are inspected by FSIS for Leukosis, giving the agency the authority to “adjust” the ongoing processing operations “as needed.”

Any verbiage, of course, that interferes with line speed amounts to fighting words for the chicken industry. In a video appearing on the NCC’s Chicken Check-In webpage, in which the accepted petition was called “a big win for the poultry industry,” Ashley Peterson, the council’s VP of Science & Technology, says that avian Leukosis really isn’t a problem anymore, nor are afflicted chickens a threat to the consumer. This will free up the USDA at the beginning of every flock change, she said, so the agency can focus on “food safety issues.”

But as Dr. “Pat” Basu, Chief Public Health Veterinarian for FSIS from 2016 to 2018 told author Amanda Little in an interview for Bloomberg Opinion, this is indeed a very real food safety issue.

Basu is quoted in the Bloomberg article as saying avian Leukosis can become a systemic disease, so simply cutting out tumors would be a cosmetic treatment, not one that would do away with the virus. Even more frightening is Basu’s reminder that Covid-19 “transferred into humans from an animal source,” and that “sooner or later” avian Leukosis “will mutate.”

Despite the NCC’s position that due to mass flock vaccinations for another avian ailment, Marek’s disease, avian Leukosis has been practically “eliminated,” it’s highly contagious within flocks, resulting in tens of thousands of chickens destroyed annually, according to Little. A study published last year out of China details one of the newer subgroups of avian Leukosis, virus “J,” which was first singled out in 1988 from “meat-type” chickens in the UK. (There are six Leukosis virus subgroups that have been isolated in chickens.)

But the NCC really doesn’t want to talk about virus subgroups or relatively recently-isolated strains of avian Leukosis. In fact, the selling points for its petition are rather odd. While saying that the virus is basically nonexistent in today’s chickens, it also states that trimming tumors and sending the diseased birds to your supermarket will “reduce food waste,” its “ethical obligation.”

So, how did we get to this situation where food safety rules are not just stalled, but going backwards?

But this is no cause for worry, assures NCC’s Peterson. “The consumer is absolutely still as safe as they were before,” she says.

Considering, however, that the CDC reported three years ago that both campylobacter and salmonella rates of infection (mostly from poultry) are increasing, with older numbers finding that over 70 percent of supermarket chickens contain dangerous bacteria, our current safety record with poultry is a pretty low bar to set.

In A Victory For Consumers, FDA Turns Thumbs Down On “Corn Sugar” Alias For HFCS

Thanks to Linda Bonvie, blogger for the Citizens for Health project Food Identity Theft, for the following post. For the past several months, we here at Food Identity Theft have urged our readers to submit their comments to the U.S. Food and Drug Administration on the Corn Refiners Association’s petition to allow the name “high fructose corn syrup” to be…

By A. Lawrence Chickering and James S. Turner The British vote to leave the European Union (EU) caught everyone by surprise—pundits, politicians and profiteers. Part of the confusion stems from analyzing the disaffection in terms of left and right. In the mainstream analysis, xenophobic racism explained why the far right wanted separation; therefore everyone else should have united around ‘remain’,…

This is upsetting for sure but what can we do to derail this ruling?