The FDA as Consumer Adversary Rather Than Advocate

Home FDA The FDA as Consumer Adversary Rather Than Advocate
0  
By Citizens For Health FDA October 25, 2013

In the more than two years since the Food Identity Theft blog was launched, it has offered numerous examples of how our food supply has been corrupted, adulterated and defiled by a whole variety of  awful additives, including synthetic sweeteners, pernicious preservatives and neurotoxic flavor enhancers that have been implicated in health problems ranging from obesity and diabetes to cancer to heart disease to Alzheimer’s.  But the question invariably raised by such revelations is: why has all this been allowed to happen when we have a regulatory agency — the U.S. Food and Drug Administration — set up for the specific purpose of guarding against such flagrant fraud and abuse? 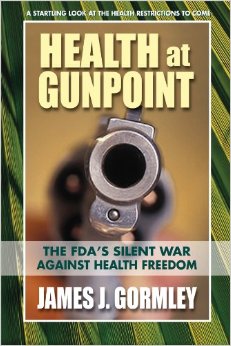 The answer can be found in a new book entitled Health at Gunpoint: The FDA’s Silent War Against Health Freedom by James J. Gormley, an award-winning journalist and editor who has had over two decades of experience reporting on health and nutrition issues and serves as senior policy adviser and vice president of Citizens for Health. (Purchase the book at Amazon.com by clicking here.)

If the book title sounds a tad exaggerated, it really isn’t, since Gormley offers a number of examples of how the FDA has indeed used the force of arms to back up its actions against companies that have run afoul of is edicts.  As the author points out, however, such “raids” have not been aimed at protecting the public from dangerous contaminants, but rather at removing from the marketplace various products, such as vitamins and supplements, that did not conform to the FDA’s ideas of what should and shouldn’t be available to American consumers. In one particularly outrageous case, a squad of nine FDA agents, 11 U.S. marshals and eight state police staged an 11-hour raid on an Oregon-based vitamin company in 1990 for the “crime” of offering to mail customers reprints of articles about the benefits of CoQ10 — a naturally occurring enzyme whose use is widely heralded today by both alternative and conventional practitioners.

While Gormley devotes one of the book’s six chapters to what’s been done to our food supply under FDA oversight, the broader picture he provides is of an agency that has strayed so far from the ideals on which it was founded that its original leader, consumer champion Dr. Harvey Wiley, disowned it a year before his death in 1930 in a treatise entitled The History of a Crime Against the Food Law:  The Amazing Story of the National Food and Drugs Law Intended to Protect the Health of the People, Perverted to Protect Adulteration of Food and Drugs.

Nor is it just the FDA’s “shameful record” of caving in to the demands of agribusiness and Big Pharma that’s covered in Health at Gunpoint.  The agency’s follies are also presented within a fascinating historical and global context that will give you a much better understanding of the lamentable socioeconomic and sanitary conditions that led to its creation, the diverse health and wellness movements and forms of alternative healing to which they also gave rise, the longstanding campaign by conventional medicine to suppress any and all such competition, and how the regulatory process here in the U.S. compares to — and is influenced by — international initiatives such as Codex.

The maneuver that got HFCS on the market

One example of the latter is provided in an inset on “Codex and Big Industry ” which explains how  Big Corn overcame the FDA’s initial reluctance to approve high fructose corn syrup by managing to get a green light for its use as an additive from the Codex Commission, which is considered the “international voice of food standards.”  As a result, the author points out, HFCS “has become ubiquitous in the food supply and Americans, especially children, have become less healthy.”

Also discussed are the effects of a globalized food culture, which has brought about the destruction of sustainable agriculture in many locales, and resulted in a large number of people being both overfed and undernourished due to the widespread depletion of nutrients in soil used for growing crops, as well as an increased threat of  food contamination.

Despite the FDA’s giving in to so many of industry’s demands, however (due in large measure, not surprisingly, to the corruption of officials with promises of private sector jobs, to say nothing of political influence), aroused consumers have occasionally succeeded in exerting enough pressure on both the agency and on lawmakers to protect their rights — and their health. While we recently saw how this can work in the FDA’s denial of the corn refiners’ attempt to reclassify HFCS as “corn sugar” perhaps the best example was the passage of the Dietary Supplement Health and Education Act (DSHEA) in 1994.

To give you a better idea of the key role this landmark legislation has played in safeguarding the rights of the American public, the author has devoted an entire chapter to “The Canada Example” — the sorry saga of how the availability of vitamin and herbal supplements largely dried up in our northern neighbor after its official health agency decided to impose the same kinds of restrictions on these traditional remedies and preventatives as it does on pharmaceuticals.  Not only were thousands of items removed from the shelves of health food stores and innovation stifled, but U.S. supplement makers stopped exporting their products to Canada to avoid prohibitive costs of meeting criteria, despite the popularity of these products with health-conscious Canadian consumers.

In fact, as Gormley shows us, before the passage of DSHEA, such commodities faced a similar fate in the U.S. at the hands of pro-pharmaceutical regulators at the FDA,and even today, are regularly threatened with stringent restraints (and that’s not to mention the adverse publicity given to any warning issued about a supplement, even while FDA-approved drugs kill tens of thousands of people and cause adverse reactions in millions more every year).

With a wealth of information packed into a half dozen chapters and a number of insets, Health at Gunpoint presents a strong case for consumer awareness of developments that might jeopardize our rights to buy healthy, nutritious food and whatever supplements we feel are best suited to  our individual needs — or even our right to know about such matters.

And speaking of the right to know, here’s something you may not have known (I certainly didn’t until I read this book) — that an apparent cure for cancer, consisting of a tea brewed from various herbs, was known to Indians in Canada. In chapter 5, you’ll find the story of how this formula was passed on to a nurse, whose aunt recovered from terminal stomach cancer after being administered it,  and who subsequently went on to work with her aunt’s doctor and other physicians to give it other cancer patients with similar results, only to be persecuted and prosecuted by the authorities for her efforts.  However, one individual who successfully used it to rid himself of cancer — and proclaimed it a cure for the disease after spending a decade researching it — was none other than the personal physician for President Kennedy.

This is the kind of stuff  all of us really ought to know about — as is the matter of how we go about protecting ourselves from our protectors. Which is why you really ought to order a copy of this book.