Hyperbaric oxygen therapy (HBOT) might be the best kept secret in mainstream medicine. It’s typically reserved for such unfortunate happenings as carbon monoxide poisoning, treating divers with the “bends” (a.k.a. decompression sickness), and to accelerate wound healing.  Alternative practitioners have been using it for a very long time to treat Lyme disease, brain injuries and chronic fatigue syndrome, among many other conditions.

As described by hyperbaric medicine expert Dr. Kenneth P. Stoller, “HBOT saturates the body’s tissues with oxygen using a pressure vessel.” The dynamics are simple: breathing pure oxygen while in a chamber with increased atmospheric pressure. Higher pressurization enhances oxygen circulation in the lungs, allowing blood and plasma to more effectively absorb and deliver oxygen to the body – exactly what COVID patients who appear headed for a ventilator need.

That “vessel” can be an individual (monoplace) see-through tube-like unit, containing a bed, or an entire HBOT room where patients look like deep-sea divers wearing sealed, clear helmets that deliver pure oxygen.

Despite the fact that an assortment of hospitals offers HBOT (mostly for wound care), including Southern Regional Medical Center in Riverdale, Ga., Hackensack, N.J. University Medical Center, Jefferson Health hospitals in the Philadelphia area and Johns Hopkins Bayview Medical Center in Baltimore, there’s been very little discussion – at least in a public venue – of its use in treating COVID patients.

One critical-care doctor trained in HBOT, while discussing some of the difficulties involved, such as most facilities not being set up to “do critical care HBOT,” along with health-care providers having a lack of experience in using the treatment (“I would not want to learn on a COVID-19 patient,” she writes), still believes that HBOT may be an option to keep patients off a ventilator.

Furthering the concept of HBOT as that option are doctors from NYU Langone Health, who quickly organized a study at the beginning of April to consist of 40 COVID-19 positive patients suffering from “respiratory compromise” (considered to be a blood oxygen level below 93%). That fortunate group will receive up to five 90-minute HBOT sessions while awake and alert, certainly a better alternative than being fully sedated so a machine can do your breathing for you. 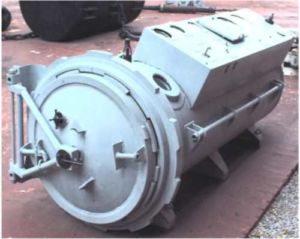 The Langone study, said to conclude in July, might be a classic example of too little, too late. And it’s not as if this is some new-fangled therapy that we’re still learning the ins and outs of.

Back in 1939 the U.S. Navy first utilized HBOT for divers suffering from the bends. In fact, the U.S. military has conducted reams of research since that time on how to make use of this treatment. HBOT was first used for carbon monoxide poisoning in 1962. Then in 1965 it was found to be effective to speed healing in burn patients. The next year saw successful use of HBOT in stroke patients, and by the early ‘70s it was found to be of use in those who had suffered a heart attack. In the 1990s brain injuries and dozens of other neurological conditions were discovered to respond remarkably well to HBOT.

And this just scratches the surface of decades of research, successful use – and often controversy – going back to 1928.

That was when a doctor from Kansas, Orville J. Cunningham, built a five-story giant sphere-like structure in Cleveland, Ohio to provide large-scale HBOT. Said to be spurred on by his successful treatment of Spanish flu patients with the therapy, Cunningham sold his sanitarium six years later after it was said he was repeatedly hounded by the American Medical Association.

Fast forward to 1983, when B.H. Fischer, M.D., a tenured professor at New York University, completed a highly successful study using HBOT for patients with multiple sclerosis. As told by Dr. Stoller, the pharma-backed National Multiple Sclerosis Society (that had funded the study) insisted on multiple revisions that “were made to weaken the conclusions” and satisfy the editors of The New England Journal of Medicine, where it was finally published. Despite the successes Fisher found with MS patients, there was no follow-up research, he lost funding and his HBOT chamber ended up being “destroyed.”

But what about now? Certainly, we have no time to wait around for the niceties of properly organized research. Why can’t HBOT be put into action on some scale, especially before patients reach critically low oxygen levels?

Perhaps some are already doing that.

You don’t have to be a hospital or clinic to have an HBOT unit, just enough money to buy one and have a health professional on call who’s versed in its use, or have enough clout to be able to make use of some privately owned HBOT center. NFL athletes, celebrities such as Jenny McCarthy, Nick Nolte, Simon Cowell and Justin Bieber (who reportedly has two chambers, one at home and the other at his studio), are some examples of rich and famous users (for a variety of reasons). And positively there are many, many more. (Might President Trump even have access to one?)

As health-care workers scramble for ventilators, is it asking too much to make HBOT available to the average COVID-19 patient?

By James J. Gormley The Federal Register states that the New Dietary Ingredient (NDI) Draft Guidance, “when finalized, will represent  the Agency’s current thinking on NDIs and dietary supplements that contain NDIs.” Although this same notice observes that the Guidance is not binding, the U.S. Food and Drug Administration’s (FDA) new dietary supplements’ director and erstwhile industry representative, Daniel Fabricant,…

NEW BREAKTHROUGH BOOK EXPOSES THE FRAUDULENT FOUNDATION OF THE GE FOODS INDUSTRY – LET’S MAKE IT A NATIONAL BESTSELLER “Druker’s brilliant expose catches the promoters of GE food red-handed: falsifying data, corrupting regulators, lying to Congress. He thoroughly demonstrates how distortions and deceptions have been piled one on top of another, year after year, producing a global industry that teeters…