On tiny plots, a new generation of farmers emerges 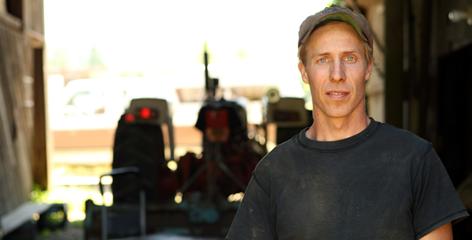 ROCHESTER, Wash. — Joseph Gabiou walks the fields of Wobbly Cart Farm with a practiced eye. He kicks dirt into place to keep the wind from blowing the protective covering off a row of organic broccoli. The seedlings are vulnerable to the flea beetles that came in the spring, just as longtime farmers in this valley told him they would.

To a new farmer, that’s crucial information. The farm, started five years ago, is young. But so is the 33-year-old Gabiou at a time when the average age of the American farmer is 57, according to the Department of Agriculture. The 2007 agriculture census found that more than one-quarter of all farmers are 65 or older.

But Gabiou and business partner Asha McElfresh, 32, differ from typical farmers in another way. Wobbly Cart, say agriculture specialists, is part of a movement in which young people — most of whom come from cities and suburbs — are taking up what may be the world’s oldest profession: organic farming

“I’m seeing an enthusiastic group of young people all across the country who want to get into farming,” says Fred Kirschenmann, a longtime farmer and fellow at the Leopold Center for Sustainable Agriculture at Iowa State University in Ames.
FIND MORE STORIES IN: New York | United States Department of Agriculture | Michael Pollan

The wave of young farmers on tiny farms is too new and too small to have turned up significantly in USDA statistics, but people in the farming world acknowledge there’s something afoot.

There was a conference for beginning farmers at Stone Barns Center for Food and Agriculture in New York in November. “We thought if 50 or 70 people showed up, that would be great,” Kirschenmann says. “The day of the conference we had 170 there.”

At a “young farmers’ mixer” last month in northern Vermont, “we were thinking we’d have 40 or 50,” says Tom Stearns of the Center for an Agricultural Economy in Hardwick. But 150 showed up, some from as far away as New York.

For these new farmers, going back to the land isn’t a rejection of conventional society, but an embrace of growing crops and raising animals for market as an honorable, important career choice — one that’s been waning since 1935, when the U.S. farms peaked at 6.8 million.

It’s about creating something real — the food people eat — and at the same time healing the Earth, says Severine von Tscharner Fleming, 27, a farmer in Nevis, N.Y. “The America that I want to live in will support people who are willing to work their asses off, who want to do good things for their community. We’re patriots of place. Here I am, I’m planting my trees.”

Three factors have made these small, organic farms possible: a rising consumer demand for organic and local produce, a huge increase in farmers’ markets nationwide, and the growing popularity of community-supported agriculture (CSA) programs.

CSAs are programs that allow consumers to buy a share of a farm’s output for one year. The farmer gets an assured income stream, and the consumer gets a box of produce delivered once a week during the growing season. Shares generally range from $25 to $50 a week.

Forty-five minutes north of Wobbly Cart, in Olympia, Wash., Jacob Wilson, 28, squats near fields of leeks, garlic and potatoes. Ten years ago, he might have been a tree-sitter, fighting corporate interests in old forests, he says. Today, one of the coolest, most enticing jobs he can imagine is farming.

“When I was younger, the best you could expect was nothing — you could make something not happen,” he says. But protesting was all about stopping things. He wanted to start something.

His partner in farming is Megan Marini, 25. In another common situation found on these small, start-up farms, the two are not romantically involved. It’s just too hard for one person to farm, so like-minded people of both genders frequently team up. “There are young husbands and wives starting farms. But much more often it’s groups of friends working in partnership,” says Tom Philpott, food editor at a website called Grist.org, which covers food and agriculture.

After Marini graduated from Evergreen State College in Olympia in 2001, she was an intern on several farms. During that time she started a quarter-acre garden on 10 unused acres near the college that were owned by a friend’s family.

She and some friends started off selling vegetables by the side of the road. In 2009 she expanded to renting 2 acres on that land, and Calliope Farm was born. “It’s just seemed the logical job for me,” she says. “What was I going to do, get a tech job?”

Michael Pollan, author of The Omnivore’s Dilemma and In Defense of Food, says he first encountered young farmers in 2006, and is excited about them.

This career choice can be a tough sell to parents who might have envisioned a more lucrative calling for their kids, he says. “I speak on campuses all the time and (see) the passion among college students for agriculture — and I’m talking about Ivy League schools, I’m talking about Brown and Yale,” he says. “It must be scaring the hell out of their parents.”

Farming actually is a good fit for many graduates, Philpott says. “There’s very little to do for educated college graduates besides sit in a cubical and punch (a) computer all day,” he says. “Small-scale farming is management-intensive. It’s an incredibly intellectual exercise, but you’re also getting your hands in the dirt — that’s why it’s so attractive. There’s a hunger for that.”

A surprising number of parents come around, Cornell agriculture professor Ian Merwin says. “It’s amazing how many of them are supportive of their son or daughter, whereas 10 or 15 years ago they would have said, ‘What! Agriculture?’ They would have said, ‘You need to go into law or medicine!’ ”

Marini’s mother, Carol, was worried that farming would be too hard. “I didn’t know if you can make a living at it,” she says. But then she visited her daughter’s farm. “It was so different there. I could hear the birds, I was seeing the horses, and I thought, ‘I know why she does this.’ ”

Marini does make a living, though it’s a spare one. Calliope grossed $20,000 last year. “We each made $8,000; that was our paycheck,” she says. She and Wilson both work off the farm one day a week to help make ends meet.

But she doesn’t worry about that much. She’s worried about getting their scapes, which are flowering garlic tops, ready for the farmers market.

The economics can be brutal. “Most first-generation young farmers work another job for a decade or more, and/or have a spouse who works full time,” says Cornell’s Merwin.

One advantage of farmers markets — in addition to letting growers sell their products at retail prices without sharing with middlemen — is that they take place on weekends, Merwin notes. A new farmer who works weekdays as a teacher, truck driver or tech support person can spend Saturdays selling produce, he says.

Philpott says there are no federal subsidies for people starting a small organic farm. They generally either start their operations on family-owned land or lease acreage that would be too expensive to buy near robust organic markets, he says.

Landowners get a tax break for agricultural use of their land, Philpott says, but there’s always the danger that the land will be sold. Organic farming requires the building up of soil quality over years.

The farmers often live very frugally, Philpott says. “You typically produce lots of food, and that cuts down on your food costs.”

Jennifer Belknap, 36, and her husband, Jim McGinn, 43, are old-timers. Their Rochester, Wash., farm, Rising River, dates to 1994. Belknap estimates they net $30,000 a year. They live off the land and keep other expenses to a minimum.

It’s like “being a ninja,” says Fleming, in Nevis, N.Y. You have to be fluid, flexible, an activist and an entrepreneur, she says. “We’re working against the odds. The educational system, the economic system, the subsidies, the tax structure for land owners,” none of them are focused on helping tiny organic farmers, she says.

Trace Ramsey, 35, one of five farmers at Circle Acres in Silk Hope, N.C., works a full-time job and devotes weekends and nights to the farm. “Having a steady paycheck really helps with upfront costs like buying feed or cover crop seed,” he says.

Ramsey worked as a technology manager for a small company for five years after graduating from the State University of New York-Genesee, where he majored in biology.

He met up with a group of like-minded friends and they decided to start a farm together. They spent six years saving and planning and looking for land to buy around the country. They finally settled on North Carolina because it had access to consumers wanting organic produce and there already was a strong organic farming community there. Their 2-year-old farm sells to CSAs, some restaurants and the local Whole Foods.

Ramsey stages what young farmers are calling “crop mobs.” A local farm puts out the word that it’s holding a crop mob to untangle drip irrigation lines or pick sweet potatoes. A crowd descends, works for the afternoon, gets fed a big dinner and then has a party and dances until dawn.

“You can do a week’s worth of work in five hours if you have 50 people,” he says. “It creates such a huge connection between everybody. Living in a rural area, you don’t often have much chance to see folks every day like our urban contemporaries.”

These young farmers are not afraid of technology. Zoë Bradbury, 29, of Valley Flora in Langlois, Ore., says her favorite farming tool is a spreadsheet. She spends all winter crafting her tillage and planting schedules on spreadsheets that govern what she does once the ground warms. “There isn’t time to think about it once you start planting.”

Along with their Facebooking, Twittering contemporaries, they also share a zeal to tell the world about their farms and their lives. Almost every farm has a website and many have blogs where the farmers post news of their trials and tribulations, from trying to get a loan from the county agricultural agent to the problems of building a reliable fence to keep deer out.

Because very few of them grew up on farms, most get the skills they need by interning, apprenticing or working on other farms.

Belknap, originally from Norman, Okla., says Rising River Farm gets its share of “idealistic barefooted gardeners” who don’t get that farming is hard work. But they keep coming, and she’s proud to say several new farmers began their career there.

It’s wonderful to do what you love, she says, but no one should imagine it’s romantic and glamorous. “We used to pull bags for our vegetables from the recycling. One of the jobs for the interns was sniffing the bags” to see if they were too smelly to use.

Capitol Wellness Expo Exhibits, Speakers, Networking February 7, 2013 10:00a to 5:30p, Cannon House Office Building, Rooms 121 and 122. Free Admission. All are welcome. Please take a moment to forward this flyer to your Representative and Senators. Ask them…

September 16, 2012 California’s Prop 37, the California Right to Know Genetically Engineered Food Act, will require the labeling of genetically modified (GM) and genetically engineered (GE) foods. The list of those organizations, newspapers and pundits calling for support of Prop…

The year 2016 will be remembered as when our two political parties collapsed inward, dragged down by their worst instincts. This meltdown will create the opportunity for renewal in each party.