Retraction and Flagging: The ‘Misinformation’ Machine Goes into Full Throttle

Just what is “misinformation?”

It’s a popular term these days bandied about by reporters, aging musicians and anyone who wants to get into a social-media argument.

But finally, a definition has been found! It was discovered in a 2021 booklet signed off by Dr. Vivek H. Murthy, the Surgeon General of the United States titled “Confronting Health Misinformation.”

Health misinformation, it states in Murthy’s 22-page dispatch, is “…information that is false, inaccurate, or misleading according to the best available evidence at the time.”

That, however, is just the abbreviated answer.

A further explanation at the end tells that defining such misinformation “is a challenging task.” Might misinformation be going against “scientific consensus?” But then again, “Transparency, humility and a commitment to open scientific inquiry are critical,” Murthy states. One also needs to be “careful and avoid conflating controversial or unorthodox claims with misinformation.”

In other words, it really can’t be defined. But whatever it is we need to stop it at all costs.

It may appear that this war against such a hazy threat to public safety is only being waged on social media. But another battleground, a place where censorship can also muffle discourse and evolving information, is the domain of scientific journals.

In any given year there are around 500 to 600 retractions from a variety of journals, the top reasons said to be errors, fabrication, falsified data and plagiarism. At last count the site retractionwatch.com listed 208 retractions in the past two years for papers that discuss covid-19.

One of those was a peer-reviewed article by Walach, Klement and Aukema, titled “The Safety of COVID-19 Vaccinations – We Should Rethink the Policy,” which appeared online in the journal Vaccines last June.

But soon after publication, while not removed, it had “retracted” stamped across the pages.

I spoke to one of the authors, Professor Harald Walach, a health researcher and professor of psychology living in Berlin, Germany, via email. He told me that he and his colleagues did not think the retraction was warranted. “The paper was meant to stimulate discussion,” he told me. “To my knowledge, not a single long-term observational study is under way (on the vaccines),” he said, adding, “I find this scandalous.”

The paper, which aimed to investigate the benefits of the covid vaccines alongside the risks, calculated what’s called the “number needed to vaccinate” (NNTV) to prevent a death from covid-19. The authors used a large Israeli field study combined with two adverse reaction databases from the European Medicines Agency and the Dutch National Register to pull out severe and fatal side effects reported from the shots.

The results they tallied did not fall in line with the ongoing vaccine narrative.

Recently published data from the six-month report of the BioNTech (Pfizer) clinical trial confirmed Walach’s original numbers were, as he called it, “not so far off the mark.” Vaccinating 100,000 people based on the new BioNTech report, “might save five lives but risk two to four deaths,” he stated.

Walach acknowledges that his original NNTV — 16,000 people to prevent one covid-19 related death — is “a very loose estimate,” now thought to be “overly conservative,” but “we do not have better data,” he said.

The fallout from the publication of his paper was swift.

Several members of the editorial board of Vaccines resigned over it, some viciously attacking the paper on Twitter. Walach’s contract with Poznan University of Medical Sciences in Poland was not renewed (he was so informed on Twitter). He also had a visiting professorship at Witten/Herdecke University revoked, and the paper was quickly retracted.

In a letter the authors wrote related to a critique on their data source from a professor at the University of Groningen in the Netherlands, they said that while they “concede that the data we used…is far from perfect (which was stated in the paper) …we used imperfect data correctly.”

“It is the only data we have. So why should it not be put to use?” they added. *

The same could be said about the U.S. Vaccine Adverse Event Reporting System (VAERS), a joint effort by the CDC and FDA.

VAERS data is typically attacked as a “tool used by anti-vaxxers,” that can’t be depended on for any type of study. And that’s partly true, being that even the CDC admits that VAERS captures “only a small fraction of actual adverse events.”  Data experts at a major U.S. healthcare system state that less than one percent of vaccine adverse events are reported. If that’s indeed the case, then any type of study, such as the one by Walach, would be guilty of vastly underreporting deaths and serious vaccine injuries.

“We are in the midst of the largest vaccination and medical experiment ever conducted on mankind,” he said, “without having adequate safety data and without proper informed consent.”

Walach’s thoughts on his paper’s retraction are that it was “politically motivated, scientifically not warranted,” and should be regarded as “an instrument of sidelining critical voices.”

Perhaps in Germany folks are now more sensitive to such things. But here in the U.S. it appears that sidelining critical voices has become rather matter-of-fact.

Mentioned, but soon forgotten by mainstream media, last July White House Press Secretary Jen Psaki announced during a press briefing that the administration is “flagging problematic posts for Facebook that spread disinformation.” And there’s more, what she referred to as the “four key steps” for social media that include a “robust enforcement strategy” against those who put out covid vaccine misinformation, quick removal of any posts judged “harmful,” and promotion of “quality information.” 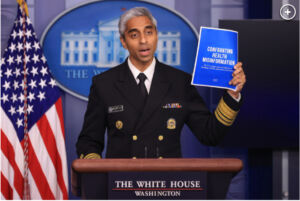 Psaki also noted that the White House engages with social media companies “regularly,” and they understand “what our asks are.”

Of course, they are just “asks.” And despite the fact that there are no specific regulations yet that target social media, government can still turn up the heat. In 2019 the FTC levied Facebook with a $5 billion fine for violating user privacy. That same year the Securities and Exchange Commission hit them up with a $100 million fine for misleading investigators in the Cambridge Analytical scandal.

Facebook executives certainly know that litigation and the threat of legislation are an ever-present menace to their business model. All of which most likely makes it an “ask” that can’t be refused.

Perhaps Psaki should consult with the surgeon general over the pesky problem of defining “misinformation.” And review the First Amendment to the U.S. Constitution.

*Regarding the usefulness of reported data related to adverse events from Covid-19 vaccines, the authors of the retracted paper make a valid point related to Covid-19 death statistics in that response, saying: “Currently we only have association, we agree, and we never said anything else. But the same is true with fatalities as consequences of SARS-CoV2-infections. The cases that are counted here as deaths are rarely vetted by autopsy or second opinion, but still counted as deaths due to COVID-19. And it is exactly this allegedly high number of COVID-19 related deaths that gave rise to an unprecedented sloppy regulation process that allowed new types of vaccines using a mechanism never before tested in humans to be widely distributed in the population.”

No doubt that statement would be flagged as “misinformation” were it to appear on Facebook.

For those interested in preventive steps that may decrease the chance of becoming infected with COVID-19, please see the I Mask + protocols below, courtesy of the Front Line COVID-19 Critical Care Alliance. A note on vaccinations and side effects: One of the side effects observed after COVID-19 vaccinations has been thickening of the blood. This can lead to clots….

0
15 Oct 2012
The FDA’s Plan to Cripple the Health Food Industry: Their New War Has Begun