The Bonvie Blog: The Labeling Trick Only the FDA Could Pull Off

The Labeling Trick Only the FDA Could Pull Off

By LINDA and BILL BONVIE

Ready or not, Halloween is coming around again.

For many, it’s a fun holiday that opens the magic portal to the holiday season. But for others, not so much!

In the UK a recent poll found that 45 percent of Brits consider trick-or-treating an “unwelcome American cultural import.”

No matter how you feel about it, however, like everything else these days Halloween comes with a wide variety of rules and restrictions. That’s right – it’s not the happy-go-lucky boo-fest of years gone by anymore.

But here’s where some rules could really make a difference, and help in your search to find treats to give out to your visiting ghouls and ghosts.

The labeling lingo that’s worse than nothing 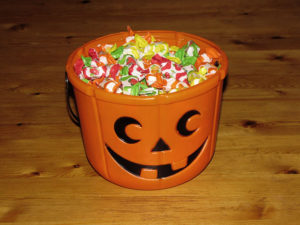 As you probably know by now the FDA’s big makeover of the Nutrition Facts Label (or NFL) – something that had been in the works for ages – was finally rolled out a little over two years ago.

Basically, this “new and improved” method to help consumers more easily select healthy processed foods is a slap in the face to science. But the top travesty of all can be found in the section that tallies up the “sugars” content – most especially the part called “added sugars.”

In that category, every type of caloric sweetener, healthy or otherwise, is considered to be nutritionally the same. Sucrose (a.k.a. sugar of all varieties), fructose, high fructose corn syrup, molasses, maple syrup, honey, and more, are all lumped together and measured in grams on the same line.

In fact, Citizens for Health filed a petition with the FDA over four years ago asking the agency to include not only the name of the added “sugar,” but the amount of processed fructose contained in HFCS, which can range from 42 to a whopping 90 percent.

And recently, the name “glucose-fructose syrup” has been popping up on ingredient labels. What is it? Nothing more than another way to say high fructose corn syrup.

The Corn Refiners have been trying to get away with spiking the fructose content of their laboratory sweetener and changing its name for years. And it looks like they may be succeeding on both counts.

So what does this mean when it comes to picking out Halloween treats?

Well, if you go by the FDA’s fancy new labeling, it could result in not knowing the difference between what’s a good choice and an absolutely frightening one.

So, here’s what you need to do: Skip the nutrition facts label altogether and go directly to the actual ingredients listing instead. Candy certainly isn’t a health food by any means, but there are plenty of treats on the market that won’t break the bank and contain ingredients that you can feel good about handing out to the neighborhood witches and wizards.

And remember, avoiding HFCS isn’t just something you want to do on Halloween. Time and time again research has found this laboratory sweetener is linked to high cholesterol and triglycerides, obesity, and an increased risk of heart disease and diabetes.

And that’s about as scary as it gets.

Capitol Wellness Expo Exhibits, Speakers, Networking February 7, 2013 10:00a to 5:30p, Cannon House Office Building, Rooms 121 and 122. Free Admission. All are welcome. Please take a moment to forward this flyer to your Representative and Senators. Ask them to send someone from their offices, and to post the flyer. Click here to find contact information for your Representative…