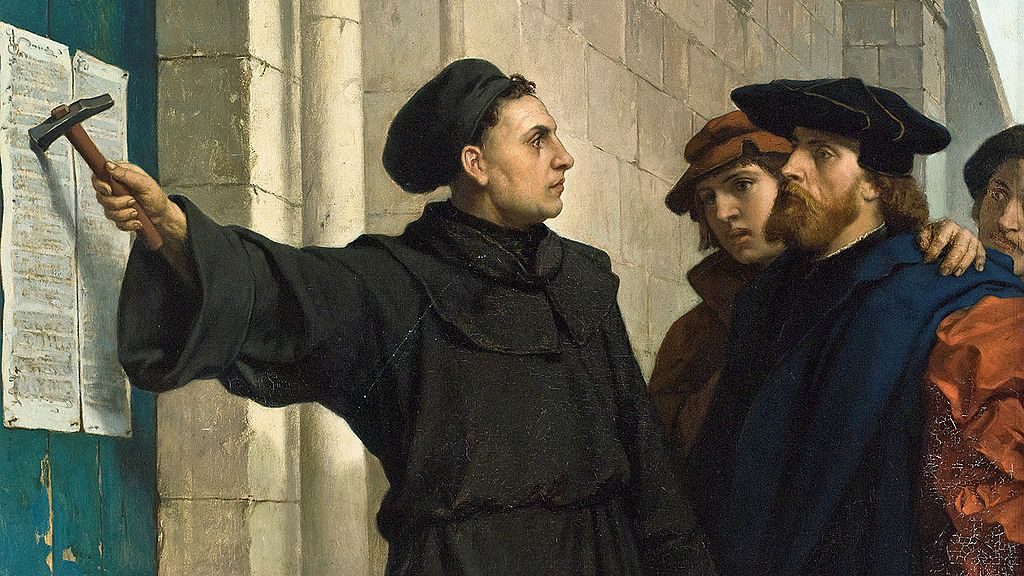 NPR reports that Gerard O’Connell, Vatican correspondent for the Jesuit magazine America, says the pope’s participation in commemorating the Reformation is proof of the extraordinary change in Catholic-Lutheran relations.

“A recognition,” it says, that “perhaps, both sides missed something at the time of the Protestant Reformation. The Catholic Church missed ways of reforming itself. Luther and those around him pressed in a way that just couldn’t be taken on board, so, in a way, both sides misspoke.”

They “misspoke” in a way that led to more than 130 years of unremitting warfare, concluding in the 1648 Peace of Westphalia, the treaty that ended the Thirty Years’ War. How we fight affects ordinary lives as much, and perhaps more, than what we fight.

Andrew Pettegree of Scotland’s St Andrews University writes on the history of communication. His book, Brand Luther,  a reviewer says, tells “a story about Luther’s relationship to media fruitful for reflection on our own time of massive changes in how people come to see what they see and know what they know and finally to believe what they believe.”

Today we live in the midst of another media revolution altering how we come to believe what we believe. Printers fed off Luther’s pamphleteering battle with his critics. They made fortunes publishing both sides. Those who hold the coats and take the bets come out the real winners.

In 1801, at the first inaugural in the still-under-construction city of Washington, DC, Thomas Jefferson said “…let us reflect that, having banished from our land that religious intolerance under which mankind so long bled and suffered, we have yet gained little if we countenance a political intolerance as despotic, as wicked, and capable of as bitter and bloody persecutions.”

Transpartisan sensibilities may help us navigate the treacherous road ahead. Much in the world besides our Presidential election will shape our future. Let’s avoid misspeaking.

Learn About: The Emerging Public Health Issue From Cell Phones and Wireless Technologies. The trillion dollar wireless communications industry has grown to dominate our lives over the past decades yet little concern has been paid by U.S. public health officials to the long term health risks from continually bathing ourselves, and our children, in electromagnetic fields. Warnings From Around the…

Search For Common Ground, Transpartisan In Action Transpartisan Note #46 by A. Lawrence Chickering and James S. Turner Daryl Davis, African-American R&B and blues musician, worked to improve race relations by personally engaging with leaders of the Ku Klux Klan (KKK). Known for his energetic style of Boogie-woogie piano, he bonded with Klansmen who loved his music. He engaged using…

0
04 Aug 2016
First Part of Battle Won in Illinois; With the Help of All of our Illinois Supporters, We Can Achieve Victory!

AMA Prepares Gag Order for Medical Dissenters – From Alliance for Natural Health The American Medical Association’s latest attempt to shore up their medical monopoly could have stiff consequences for practitioners who don’t toe the line. Action Alert! Angered by what they call “quack MDs,” the AMA recently decided to “actively defend the profession.” In particular, it plans to create…