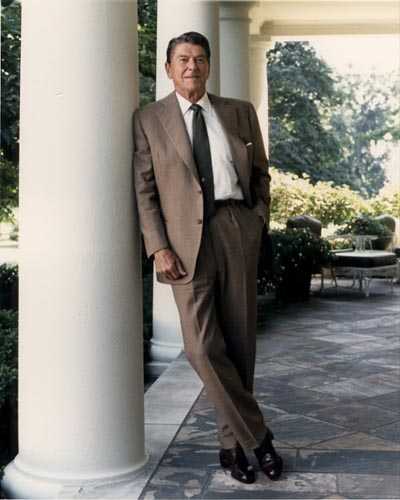 “This is Ronald Reagan, speaking to you from Hollywood … more than a little impatient with those promises the Republicans made before they got control of Congress a couple of years ago …

“The Republican Speaker of the House, said, … ‘We Republicans intend to work for a real increase in income for everybody by encouraging more production and lower prices without impairing wages or working conditions.’ … But what actually happened? The profits of corporations have doubled, while workers’ wages have increased by only one quarter.

“Now think of the contrast with the Standard Oil Company of New Jersey, which reported a net profit of $210 million dollars, after taxes, for the first half of 1948.

“Since the 80th Congress took over …

• Labor has been handcuffed by the vicious Taft-Hartley Law.
• Social Security benefits have been snatched away from almost a million …
• Fair employment practices … have been abandoned.
• Veterans’ pleas for low cost homes have been ignored …
• Tax reduction bills have been passed to benefit the higher income brackets alone.
• In the false name of economy millions of children have been deprived of milk once provided through the Federal School Lunch Program.

“This was the payoff of the Republicans’ promises.

“And this is why we must have new faces in the Congress of the United States,

Reagan began in politics as a liberal Democrat, which he remained until 1960, helping to found the liberal Americans for Democratic Action, campaigning for public office for Hubert Humphrey, and supporting the New and Fair deals of Franklin Roosevelt and Harry Truman.

Max Kampelman, a longtime liberal Democrat in the Hubert Humphrey tradition, served as arms negotiator for both Presidents Carter and Reagan. He found Reagan to be quite open on arms control. He offers the following story of his appointment as arms negotiator by Reagan as evidence.

The president told him, as he tells it, that:

“Secretary of State George Shultz had suggested he listen to an idea from me. I presented it in summary form. White House chief of staff Jim Baker, saying that Shultz had made a contrary suggestion earlier in the week, said he agreed with Shultz and did not support my proposal.

“Ed Meese spoke up, as did two or three others in the room, all agreeing with Baker. I did not take this as a personal affront in any way, and had not expected to get even this far with my idea. But the president, sensing disappointment I did not feel, spoke up. ‘Don’t pay any attention to these fellows, Max,’ he said. ‘Not a single one of them was ever a Democrat.’”

According to Reagan biographer John Patrick Diggins, in Ronald Reagan: Fate, Freedom, and the Making of History, “A week later Kampelman received a call from the president telling him he had been appointed chief arms negotiator for the upcoming Geneva conference.” (link)

We believe that effectively addressing significant problems such as arms control and the avoidance of war requires the kind of integration of skills, philosophy and points of view exemplified by Ronald Reagan in his choice of Max Kampelman as arms control negotiator. We call this Transpartisan.

As a work prepared by an officer or employee of the United States Government as part of that person’s official duties, the above photo is in the public domain.

New Report About EMF Near Schools

Washington, D.C. – CFH has learned that on May 5, Minnesota Lieutenant Governor Yvonne Prettner Solon sent a letter to the FDA expressing the state’s unwillingness to support this “corn sugar sham”.