Daryl Davis, African-American R&B and blues musician, worked to improve race relations by personally engaging with leaders of the Ku Klux Klan (KKK). Known for his energetic style of Boogie-woogie piano, he bonded with Klansmen who loved his music. He engaged using a fundamental principle of action: “Establish dialogue. When two enemies are talking, they’re not fighting.”

Search for Common Ground, founded in 1982 to find ways to end violent conflict, gave Davis one of its Common Ground Awards in 2014 to honor his outstanding accomplishments in conflict resolution, negotiation, community building, and peacebuilding. Davis directly affected race relations by befriending, and talking deeply with, KKK leader Roger Kelly and other Klan members. 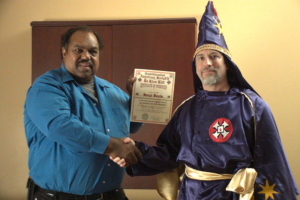 Eventually Kelly quit the Klan. “He no longer believes today what he said,” Davis explains. “And when he quit the Klan he gave me his robe and hood, which is the robe of the Imperial Wizard.” Twelve other Klansmen have done the same.

Read this and other Daryl Davis stories in Conor Friedersdorf’s March 27, 2015 article in The Atlantic, “The Audacity of Talking About Race With the Ku Klux Klan.” Hear Daryl interviews here and here. Listen to Daryl’s music here, here, and here. Check out his book and DVD here. Daryl’s is an inspiring story of what can happen when adversaries talk with each other.

Common Ground founder, former State Department diplomat John Marks, says recipients of the Common Ground Awards show what can be achieved when we work with, and for, each other. Recipients have made significant contributions toward bridging divides and finding solutions to seemingly intractable problems. The list of Award recipients reads like a glossary of group and individual efforts creating possibilities for a less violent world. Daryl Davis, who received the Award in 2014, provides one powerful example.

FDA bans seven cancer-causing food additives. How many more are out there? After a 30-year hiatus the Delaney Clause makes a return appearance By LINDA BONVIE Late last week the FDA announced the ban of seven food additives known to cause cancer. These consist of a group of tongue-twisting chemicals such as synthetically derived benzophenone, eugenyl methyl ether and one…

Courtesy of Linda Bonvie FoodIdentityTheft Blogger and CFH Contributor April 23, 2013               What do you do if you’re the great and powerful American Dairy Industry and you want to make a major change in U.S. Food and Drug Administration food-labeling regulations, only to have your proposal met with an uproar from consumers? Well,…

Thousands of members of the natural health community called and wrote Senate offices between yesterday and today, calling on their Senators to oppose an anti-supplement amendment, Amendment No. 2127, from Senator Dick Durbin (D-IL) that would have ridden the coattails of the FDA Safety and Innovation Act (S. 3187), also known as the FDA User Fee bill (S.3187). And you won!!!…