Our country’s partisan divide impacts the way we do business, whether we work in commercial, nonprofit, academic, or government programs. The following short article, written with fellow public policy analyst A. Lawrence Chickering, explores one of the many facets of this impact when examined from the “Transpartisan” perspective. 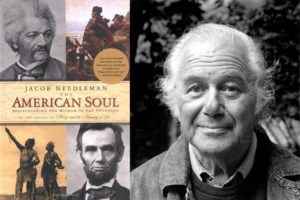 The American Soul: Rediscovering the Wisdom of the Founders (San Francisco State University), Philosophy Professor Jacob Needleman’s 2002 book on the meaning of America, offers insight, solace, and guidance for 2017 Americans.

Professor Needleman sees in the face of Lincoln, the mind of Jefferson, the character of Washington, and the multitude of attributes of the men and women of America’s founding generation the emergence of “the idea of America” leading to “a community of conscience”.

Dr. Needleman’s website says of the book, “At the heart of The American Soul is a call to rediscover the timeless truths hidden within the founding vision of the American nation…this uniquely American vision has the power to speak again to the modern world’s need for meaning and community.”

The book addresses American slavery, the destruction of the culture of the American Indian, and the Vietnam war, which Dr. Needleman calls “crimes and defeats,” saying they “cry out for a clear vision of America asleep to its own spiritual essence, while bringing home the depth of what America owes to its own people and to the earth itself.”

Publishers Weekly said of the book, when it was published in 2002, “While Needleman clearly finds much to love about America, he balances our light with our darkness, our genuine good will and spirituality with our great crimes….Needleman’s latest work gives open-minded readers a new set of spiritual role models and much valuable food for thought….”

We believe that Dr. Needleman captures an essential aspect of what we observe, suggest, and advocate as Transpartisan politics and policy. In particular, we believe that a large majority of the individuals disassociating from current political parties and processes resonate with the deep subjective part of the American essence described by Dr. Needleman. We believe they are searching for ways to express that resonance.

The book closes with a call for rekindling the American mythology, to understand what is truly eternal and indestructible in the American vision. As the transpartisan political process unfolds we believe that its expression is shaped by the essential American vision.

We heard a transpartisan side to Donald Trump’s victory speech and reprint parts of it here to mark a first step in Trump’s presidency and as a measure for it as it unfolds. We suggest that as transpartisans we take up the invitation.

0
19 Sep 2018
The Bonvie Blog: The Labeling Trick Only the FDA Could Pull Off

The Labeling Trick Only the FDA Could Pull Off By LINDA and BILL BONVIE Ready or not, Halloween is coming around again. For many, it’s a fun holiday that opens the magic portal to the holiday season. But for others, not so much! In the UK a recent poll found that 45 percent of Brits consider trick-or-treating an “unwelcome American…

New Study Finds that Fructose Fuels Cancer Cells By LINDA and BILL BONVIE Canadian Sol Orwell may not be any relation to the late British author George Orwell, but some of the statements made on the website he co-founded seven years ago, Examine.com – an endeavor which he says is intended to rebut “outlandish claims” on topics like health, nutrition…

2
02 Feb 2022
Read Your Labels: “Glutamic Bombs”: Playing Tricks on Your Tongue and Havoc with Your Brain