Taco Trucks at Every Mosque

‘Taco Trucks at Every Mosque’ is a celebration of breaking of the fast (iftar) during the month of Ramadan by Orange County, California, Muslim and Latino community members. It took place June 15th at the Islamic Society of Orange County in Garden Grove. Orange County’s OC Weekly reported that a line of fourteen hundred people of all ethnicities and religions formed for halal (fitting Muslim dietary laws) tacos. 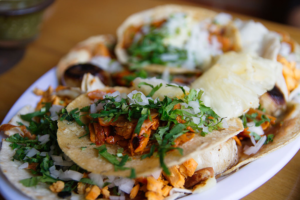 Muslim activist Rida Hamida and Santa Anna Valley High history teacher Ben Vazquez came up with marking iftar by breaking bread—tortillas—together. Hamida is president of the county’s Arab American Chamber of Commerce. Vazquez is a board member of El Centro Cultural de Mexico. They seek to unite their communities by recalling their shared roots dating to Muslim rule of Spain (circa 711 to 1492).

On the evening of June 4, 2017, two Salt Lake City Mormon congregations—the Yale Ward and the Gregson Ward—hosted iftar dinners for their Muslim neighbors, The Salt Lake Tribune reports. These communal meals break the daily fast at sundown during Islam’s observance of Ramadan (May 26-June 24 in 2017). Ramadan is a month of fasting, prayer, scripture study and charity for all devout Muslims.

Area mosques—the Utah Islamic Center, the Islamic Society of Bosniaks, and the Muslim Community Center—enthusiastically supported the event. Those mosques brought such iftar dishes as ‘biryani,’ a spicy mix of rice, meats, dried fruits, eggs and yogurt, and other traditional foods from a range of Muslim ethnicities. Imam Shuaib Din sees sharing iftar with his Mormon neighbors as an important milestone.

‘For the first time in Jacksonville’s recent history,’ reports the Florida Union Times, ‘Jews and Muslims came together to celebrate their separate religious holidays in one sanctuary.’ The paper reports Rabbi Jonathan Lubliner and Parvez Ahmed, the event organizers, saying, ‘While local Jews and Muslims have held interfaith events before, they’ve never hosted something as intimate as this.’

Haaretz, the Israeli paper published weekly in North America, reports that ‘At a burgeoning number of synagogues across the United States and Europe, observant Muslims are breaking their Ramadan fast in Jewish settings this holy month.’

Israeli Ambassador to the US Ron Dermer hosted an iftar dinner in Washington, DC, as did Los Angeles’s Israeli consul general at his office. To be sure, the paper says, ‘Jewish-hosted iftar dinners have happened in some places for several years. But from Berkeley to Brooklyn to Brussels, they’re far more frequent than ever.’

The Salt Lake Tribune summed up the significance of these events, saying ‘Fear, stereotypes, ignorance and hunger have this in common: They seldom survive sharing a meal, honest conversation, a desire to learn and making eye contact with the stranger across the table.’

Personal, local, subjective experience like that, occurring at these events lies at the heart of the transpartisan political impulse. Increasingly, individuals in local communities harness this force.  Increasingly, local individuals sharing intimately together overcome fear, stereotypes, ignorance and . . . spiritual as well as physical hunger.

We look forward to the day when national news outlets prominently feature positive stories like these, which reveal important realities about the country and its emerging transpartisan impulses. Routine ‘narratives’ about the country tend to focus more on divisions than on the productive, creative solutions to those divisions that citizens engage in every day.

1
10 Dec 2020
The FDA’s Plan to Cripple the Health Food Industry: Their New War Has Begun