As the novel COVID-19 vaccines speed closer to reality, one vital piece has been left hanging.

What assistance will be given to those who find themselves injured or disabled by the shot? Even if a nearly perfect vaccine has been created, it’s a given that some number of recipients will have a reaction to it or suffer injury from the shot itself – especially considering the huge numbers of Americans who stand to receive it.

We know that, in part, based on claims that have been filed – with many settled – by a special court established in 1986 dubbed the National Vaccine Injury Compensation Program (VICP). This is considered to be a striking admission by the federal government that vaccine injuries are, in fact, real.

But serious reactions to a pandemic vaccine, as well as injuries from treatments, will not be handled by the VICP. Instead, COVID claims will be funneled through a little-known federal setup called the Countermeasures Injury Compensation Program (CICP), designed (as was the VICP) to provide sweeping liability protection for pharmaceutical companies for certain vaccines. (A countermeasure is defined as a vaccine, drug or device, such as a ventilator, used during a declared pandemic or security threat.)

CICP, however, isn’t just a spin-off from that earlier, established program. Far from it. Those who know it well call it a “black hole,” which operates under a veil of secrecy, and has only granted 10 percent of the claims it has received since 2010 (versus 75 percent approved and paid during the last five years by the VICP).

The countermeasures program was hatched from PREP (the Public Readiness and Emergency Preparedness Act) in 2005. Spearheaded by then-Senate Majority Leader Bill Frist, the package was tucked into a “must pass” military spending bill. And from the start it was criticized for its lack of relevance to the military bill, the high bar set for injured parties to receive benefits, and the all-encompassing protections given to drug-makers. Senators Ted Kennedy, Tom Harkin and Chris Dodd noted at the time that the bill was a “Christmas present to the drug industry and a bag of coal to everyday Americans.”

Now, 15 years down the road, apparently nothing has changed. 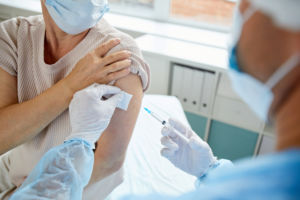 I spoke via Zoom to Peter Meyers, a professor of law emeritus at George Washington University Law School and expert in federally sponsored injury compensation programs, who confirmed that the current CICP is “the exact same law that was passed in 2005.”

“Congress passed this statute with no hearings and no public discussion. It’s a much worse program (than the VICP),” he said.

Meyers, who served as director and faculty supervisor for the George Washington Law Vaccine Injury Litigation Clinic (set up to represent children and adults who have been injured by childhood vaccines utilizing a cadre of “student attorneys”) and who knows the ins and outs of the VICP probably better than anyone, calls Countermeasures “great” for drug-makers, but a “terrible program” for anyone seeking compensation for a COVID-19 vaccine injury. As Meyers explained in a recent law journal article, the program protects not only manufacturers, but those who distribute and dispense the vaccines — as well as other pandemic drugs and devices — from “any liability…even when the company is guilty of gross negligence in producing its product or makes deceptive claims in marketing it.”

For an injured vaccine recipient, however, things aren’t quite as clear-cut.

“Even if you can navigate the program successfully, which hardly anybody has done, you get much more limited compensation,” Meyers told me.

For example, while Countermeasures provides for lost income, there are caps on the amount, whereas the VICP provides full payment for documented lost wages. Other major differences include limits in Countermeasures for paying medical expenses, zero compensation for therapy treatments, pain and suffering, doctors and other experts to testify on your behalf, and legal representation – all available in the VICP. Countermeasures also prohibits judicial review (going before a judge) for denied claims. Such claims never make it out of the Department of Health and Human Services, unlike the VICP in which some vaccine injury appeals have been taken to the Supreme Court.

Then, there’s the secretive way that the program is operated.

Until Meyers filed a Freedom of Information Act request this summer asking for specific details on past Countermeasures claims and payments, it wasn’t even known what vaccines or other drugs or treatments the program had received claims for or paid out.

What he received showed 446 claims were made for “covered countermeasures” since 2010, the lion’s share being for the 2009 H1N1 vaccine (407), and a handful for other treatments such as Tamiflu, the smallpox and anthrax vaccines.

“We still don’t know what the injuries were and why (so many) were denied, because that’s a secret,” said Meyers. The data released shows that only 39 claims were granted by the program. “It’s really an abysmal record,” he said.

Any Countermeasures claims that are submitted will be decided by an official within Health and Human Services in a covert proceeding. The applicant will eventually receive a letter in the mail with the decision.

As far as funding goes, the VICP program is financed through a 75-cent tax added to all childhood shots as well as the influenza vaccine, and has so much excess cash in its coffers that, according to Meyers, the program often makes loans to other needier agencies. The Countermeasures program, on the other hand, is financed through Congressional appropriations.

Meyers, who believes that drug-makers should continue to be protected from liability, is baffled why no one, including politicians and media, appears interested in this issue – especially when he believes there are straightforward ways to improve the program.

He suggests that we either amend Countermeasures, move it into the established VICP, or create a standalone program similar to the 9/11 Act.

We thank you for following along with the evolution of the Transpartisan Review. We believe strongly in this project by CFH President and Board Chair James S. Turner and colleague A. Lawrence Chickering – an effort to free the issues of the day from the shackles of partisan politics as a means of finding common ground for a solution-oriented dialogue…

0
19 Jan 2020
The FDA’s Plan to Cripple the Health Food Industry: Their New War Has Begun

From our Read Your Labels Campaign, an installment in the series “Top Ten Food Additives to Avoid”, courtesy of Linda Bonvie Found in all kinds of foods and beverages, you need to be on the lookout to keep this toxic additive out of your diet The second place designation in our Citizens for Health “Read Your Labels” campaign of food…

UPDATE: Watch Senator Blumenthal’s press conference on the dangers of 5G: View it here. As the Senator notes, despite the FCC’s assurances that 5G is “safe,” “We need evidence.” And classified evidence is NOT enough. CFH and NISLAPP believe the available scientific evidence: The impact will be harmful. “We do not know it is safe” is very different than “It…

By James J. Gormley With Citizens for Health supporters already having generated over 11,000 letters to Congress demanding that the FDA’s NDI (New Dietary Ingredient) Draft Guidance be withdrawn, the organization is now on a mission to collect 10,000 petition signatures in 10 days calling for Congress to withhold FDA appropriations until this unaccountable agency is held to account: by…

It is blatantly clear they do not care about the citizens here. Example:
If I concocted a mixture the same as the vaccine, the same ingredients in cigarettes and sold/gave it to some one, I am surely going to be prosecuted. The same principle as the banks stealing money. If I steal a steak because I’m hungry, I’m going to jail. They steal millions, vacations and severance packages. These demons will meet the same evil themselves.